It didn’t happen like I thought it would. I guess I had this vision of it being some kind of monumental occasion, like it would somehow line up perfectly with a plethora of family and friends around with video cameras (ok, smartphones) to capture the moment and cheer for him. To be honest, I don’t even remember the exact moment. I have a little bit of mom guilt about that, but I’m working on letting go of that in as many situations as possible. Like so many of these firsts, they happen quickly and organically and when we least expect them to. They aren’t as momentous as we imagine—just another small step in the intricate, mundane, joyful, frustrating and beautiful process of growing humans. 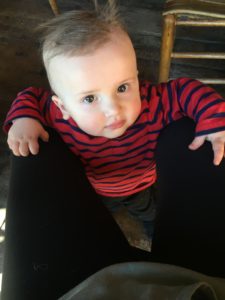 Theo has always been very grounded and present in his body. I attribute this to his Taurus zodiac sign and also to his daddy Chris’s influence. I feel that he really takes after his father in his ability to move through the world solidly and comfortably in his own body. For the first few months of his life, those were of course just tiny movements. Discovering his hands and feet, learning he could lift his leg to his mouth and chew on his toes, lifting his head and rolling over, etc. I remember one day my mom and I were hanging out with him in my bed talking and not paying him too much attention, and before we knew it, he had scooted his entire body across the bed. I had never seen him scoot before! It’s almost like they store up these skills for months until they feel ready to reveal them, but secretly they had them all along. I know that isn’t actually the case, but sometimes the suddenness of all of it is shocking.

With walking, I always sensed that he would be an early walker, mainly because of his grounded nature and strong rootedness. His auntie/caregiver Shaina spent a lot of time working with him on building his leg muscles (which she dubbed “strength training”), and she, Chris and I spent hours on hours walking with him when he was small and still needed us to hold both of his hands tightly (all but breaking our backs in the process!). We finally invested in a walker for him when he was about 9 months old and it made a world of difference, allowing him to feel independent cruising around the house and having the freedom to decide where he wanted to go (until he would hit the carpet in the living room and we would have to come rescue him and lift the walker over the carpet lip). We still made it a point to always let him practice with us too, to continue building his trust and confidence in us as his supporters (both literal and not).

Then one day a couple weeks ago, Chris decided to let go of both of his hands. He was ready. He took a couple steps and fell into my arms. But Chris says he had already done solo steps a few times before, I just wasn’t there to see it. It was so surreal. This human that I grew in my body was walking! It’s “early” for him to be walking (he started at 10.5 months) and it does make me feel proud. But there will be plenty of things he’s “late” with. I try to take everything moment by moment and not get too attached to anything. This has become one of my biggest parenting lessons, and ongoing goals. I’m just excited to go on more adventures with him now—walking side by side.