Jennifer Givhan’s debut collection of poems, Landscape with Headless Mama kicks off with lines in the vein of “I was a grave/digger then. A rat fleeing ship. Mama,/who hadn’t sung to me since I was a baby &/never would again, was the lynchpin—/I’m still turning & turning the screw” and continues to mine the vein of family and the longing for it, the relational dynamics of motherhood and daughterhood, markers and destroyers of identity, all layered around its central theme of fertility/infertility. Givhan addresses these themes with an unflinching eye and a brave language. This material is ripe for cliché and sentimentality, but by some magic entirely of her own conjuring, Givhan steers clear of it at every turn. 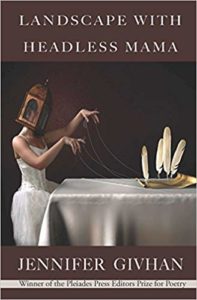 The first section of the collection “Wide View of Mama” explores the speaker’s relationship to her own mother, her lineage and origins in a small southwestern town. The dry landscape provides a parallel for the “barren” landscape of the speaker’s body as her struggles with infertility are explored in the following two sections: “Landscape with Headless Mama” and “Innerscape (The Miscarrying Artist)”. In the poem “Self Portrait as the Years Between Conquest, Or The Desert Must Sustain Herself”, Givhan begins to draw this parallel, writing “in a sandy ditch by desert night, an owl/traces maps of the borderland into my body—/cliff dwellings, the taste of red brick on the tongue”. She continues to draw out the parallel between the longing inherent in this landscape and the longing of a body for another body—whether it be a lover or a baby—throughout this section. In “Town of Foolish Things” she writes, “I drank too much & swallowed something precious…did we not cross the border after midnight?/ Was the worm in my belly a dream? Town of crossings/town of bottle-smashing, still—town of broken things”.

The final two sections “Moonscape as Mama, Or The Artist Births Herself” and “Aerial View of Motherhood, Or Mama Rising” delve into the strangeness of finally becoming pregnant after harrowing bouts of loss, and fertility struggles. Givhan presents a speaker who walks through the fire of these struggles and emerges like a phoenix into the light of motherhood, though she doesn’t shy away from acknowledging that this light comes with its own blinding burn. Throughout this weird and stunning first collection, Givhan balances the dark and the light, the earthy and surreal. In poems like “Nine Months Pregnant”: “But even sweetness, even overflowing &/arching & malting & moon-/heavy & cow-eyed & summer-sprawled,/sweetness the same” she conjures a vocabulary that often seems entirely her own, marked by a blend of pathos and absurdity that feels perfectly suited to the pathos and absurdity of what it is to grow another human in the body and carry it through and out of the body into the world.

The speaker journeys away from the ghost town of her origins, channeling her nebulous longing into the more precise longing for a child. The longing is both magnified and assuaged as she brings children into her world, through adoption and through giving birth. “The Eggs”, “Insemination” and “The Test” are jarringly precise and heart-wrenching depictions of the mundanities of conceiving a child. Givhan juxtaposes these with the equally jarring realities of an open adoption in the age of the internet, writing in “Jeremiah Growing” of texting her adopted son’s “birthmama” and subsequently holding him in her arms while he video chats with her for the first time, all three unsure of what to say. In these poems, however, Givhan never feels unsure of what to say, her voice resounding through the vast canyons and deserts that characterize the landscape inhabited by all mamas.

Julia Alter, LICSW is a birth worker, clinician, and poet from Philadelphia. She completed her undergraduate degree in Literary Arts with Honors in Poetry from Brown University and received her Masters in Social Work from the University of Pennsylvania. Julia trained as a birth doula with Birth Arts International. She is committed to inclusivity and respect for individuals and their choices, both in birth and in life!