“Birth is about crossing over the bridge of what we can imagine about ourselves and our lives, it is about letting go of the constructs we believe to be true and opening ourselves up to what is given to us. It is about becoming a child again, about seeing with fresh eyes and being accepting and open to everything, meeting it with curiosity rather then judgment and fear.

For me this meant some of my walls being broken down, which was truly painful but like any real growth experience, the best thing that ever happened for me. Vivian means “life” and I think of this often with her name; having children is about choosing to fully live an un-curated life, you get to be with all of it, I am so grateful to be a mama.” – Katie Schmidlen

When I first met Katie, we were celebrating a mutual friend’s birthday. After being introduced to her nine-month old, Vivian (meaning Life), I asked Katie how she felt at this mirroring moment of nine months in and nine months out. Katie then shared Vivian’s journey Earthside, an incredible story of self-advocacy and empowerment in the midst of heartbreak: a triumphant birth story.

Katie met Joe, then neighbors, when she moved to Vermont. He was underneath a car fixing something and now they are married with two beautiful daughters. The rest is herstory, and an empowering story to share.

Genevieve, their first daughter, was born at home to a feverish mama in a rather “dreamy” state. Katie discovered that although she was sick while giving birth to her first child, she still had the strength to birth her daughter at home. I asked her to compare her two births.

“It was as if with Genevieve, the beginner’s mind helped me overcome fears and exhaustion, whereas, everything with the birth of my second daughter felt opposite, as though I was forced to be awake for what was to come.”

Vivian was at risk for low-birth weight, and an ultrasound at 39 weeks revealed that not only was she not receiving enough blood flow but she was suddenly breech! The doctor advised induction the next day. Katie felt devastated, as she deeply wanted another home birth. She didn’t sleep well that night and when she handed Genevieve over to her mother the next morning in preparation to go to the hospital, she was “heart-broken.”

Prior to the induction, Katie made an intuitive choice to attempt an external manipulation of unborn child. Her midwife, Peggy Cohen with Full Spectrum Midwifery, had taught her a sequence of movements that Katie recalled just in the knick of time. It proved to create the most rewarding outcome possible at her hospital birth, and empowered Katie and her family in ways that could only be described by the doctor as, “a Christmas miracle.”

“While they were preparing us for the OR, which was literally taking ALL DAY (Friday before Christmas craziness), out of a place of curiosity I said to myself, let me see if I can turn her,” Katie recalled. “So I moved her little butt up and her head down as I went back and forth from standing to downward dog, and she just turned!”

Katie described the experience as nothing short of amazing. “I just kind of followed her leads. I felt the openings as she moved and I just went with her.”

The external hand-manipulation technique known to turn breech babies can be dangerous and painful. Katie and her daughter experienced neither; it proved to be the exact tool that was needed to avoid surgery and have a vaginal birth, head down!

The point of this story isn’t to encourage a woman to turn her breech baby on her own, because it can be dangerous and cause the placenta to separate early. Rather, it shows us that within each birth, there comes a point of no return; within each woman, there is a place of knowing, an inner voice (“trust,” Katie advises). In choosing to listen, a birthing person chooses self-empowerment and honors themselves and their baby beyond comparison. 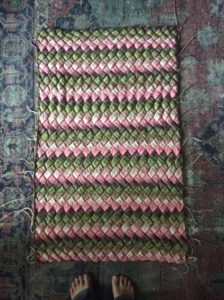 Vivian’s birth had many challenges. Katie knitted a blanket during her pregnancy and described to me the significance of her chosen colors. They told the story of her emotions as she moved through her pregnancy. After defying the odds and turning her baby just before a presumed surgery, Katie had a renewed sense of empowerment and readiness to face whatever challenges lay ahead. She turned to her husband and midwife and said, “game on!”

My hopes in sharing Katie’s story, is that it validates the therapeutic benefits of story telling for Katie and for all our readers. Sharing birth stories both educates and empowers. By reading one woman’s story of transformation in the face of adversity, we may find a glimmer of self-advocacy and a tiny burning ember of hope, strength and wisdom in the deep barrels of doubt. Our stories can provide the final nudge for another in their journey toward trust in oneself, enabling them to respond to their deep intuitive voice and act accordingly in that one pivotal moment of clarity.

Pippa Dorfman is a certified pre/postnatal yoga teacher, birth doula, and educator from Massachusetts. She received her doula training through DONA International and midwife assistant training through Ina May Gaskin at The Farm in Tennessee. She went on to apprentice as a homebirth midwife assistant with Midwife International at Manos Abiertas in Ciudad Vieja, Guatemala. She received her B.S. in wellness and alternative medicine from Johnson State College in Vermont. She has been attending births since 2011. Pippa is the owner of Jeffersonville’s Stepping Stone Yoga Studio and the creator of Red Yurt Project – a community space for celebrating the sacred feminine.